Cookies help us deliver our services. By using our services, you agree to our use of cookies. More information

Alright so you've assembled your roster, made them nice fancy kits, gave them a stadium to play in, and they're ready to hit the pitch. Problem is though, you know nothing about divegrass, /sp/ is gonna help you, and you find sports boring, what to do?

Taking a look at this page can be somewhat intimidating but it's not complicated. Open up the blank strategy guide found below and edit it. Start scrolling down the page. Offensive and Defensive Strategy choices are mostly one or the other. Advanced Instructions can be considered additional flavoring, giving your team specific tactics to perform on top of the Basic Strategies. Each choice is explained with both in-game explanations and plain language ones for those not divegrass-inclined. You can figure out which strategies complement each other based on these explanations. Once the strategies are selected, pick your roster players who will take free kicks, penalties and corners (Player Settings), and finally create your Sub Strategies. These are open ended, and require a bit more divegrass knowledge than the other bits. Of course if all else fails you can view a sample strategy and even ones used in the previous Cup to straight-up steal for inspiration. Again, these can be found at the bottom of the page. 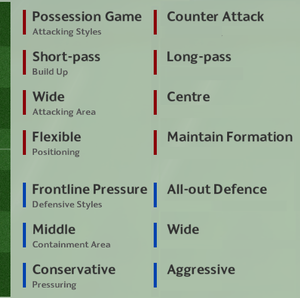 The basic strategies available to each team in PES.

Every team in PES bases their play on ten "Basic Strategy" settings that are accessible in "Game Plan". These ten settings are divided into two groups: Offensive Strategies and Defensive Strategies, at 5 apiece. 7 of these settings are simple "one-or-the-other" choices, while three are done on a 1-10 slider. Note that in-game explanations are italicized while the plaintext is a summary explanation of each strategy.

Strategy begins with the formation. Your team's formation is how they line up on the field and helps determine how your team sets up on both sides of the ball, e.g. if your formation has players out wide, you'll likely want to be playing the ball there. Formations are read from the defenders to the forwards, and they never list the keeper. There are several "classic" formations in divegrass, such as the 4-4-2, the 4-3-3 and the 3-4-3. More modern formations tend to still follow the basic outline of the older formations, but are more specific in terms of player placement, for example 3-3-1-3, 4-1-2-1-2, and 5-2-1-2. Bear in mind that while PES allows you to place your players anywhere on the field in formation, you will have to tell the game a basic format for it to follow, so if you want to run something crazy that isn't listed by the game, you start at the formation that most resembles it and organize from there.

How your team begins to mount attacks when they have the ball.

Pretty easy to figure this one out.

How your players adapt to the flow of play.

The first slider setting, this determines how far players tend to spread themselves out when looking to receive passes on offense.

What area of the field your defenders will try to funnel attacks in order to stop them.

Pretty easy to figure this one out.

The second slider setting. The higher the level, the further up the pitch the defensive line will be.

Last slider. The higher the level, the more compact the team's overall shape becomes when defending.

Advanced Instructions are available to teams for use on top of the Basic Strategies outlined for a team. Teams are limited to two Attack and two Defense instructions at a time, but they can be both switched on and off.

Players on both flanks stay close to the touchline. This means that even if the ball is on the other side of the pitch, the player on the flank will stay wide.

Both full backs will surge forward while midfielders drop back to cover them. As the full backs push forward, the wingers will move to the middle.

When a player is in possession of the ball on the wing, a teammate will head to the touchline to give them more passing options. Other teammates will run into the space that has been created.

The priority is to keep passing the ball. Players take up positions to enable possession to be retained. Players will tend not to try to dash into space behind the opponents defense.

The striker will frequently drop into the hole to collect passes. As he comes back for the ball, his teammates will push forward to fill the space he has created.

The aim is to score from crosses. When a player on the wing has possession, forwards will get into position in front of the goal and wait for the cross.

The full backs stray from their traditional positions and push into the center. This gives the team numbers in the middle of the pitch.

Certain players will be marked much tighter than usual, with the marker switching depending on the position. Space tends to open up as players track the opposition player they're marking

The defending team drops back to guard against through balls, leaving more space between individual players and the opponent they are marking. As players are no longer tightly marked, it makes it easier to pass the ball to feet.

When the opponent is pushing forward up the wing, players will group in front of goal. As players are bunched up near the goal, it becomes easier for the attacking team to shoot from afar.

Certain forwards stay in the vicinity of the opposition's box rather than dropping back to help the defense. It means that these forwards do not use up energy running back and forward.

When a team loses possession, the immediately try to win it back with multiple players putting the player on the ball under pressure. It demands a lot of stamina.

As an alternative to live managing, teams will submit general statements that instruct which bench player to take the field and when. These statements can name a specific player (sub on Gondola :DDDDDD) or just be general (sub off the most tired defender). They can also be dependent on stamina or condition (those arrows beside each player on the Game Plan screen). Each sub strategy must list a time however, as the person responsible for making the changes (in this case the streamer) can't be asked to make a judgement call on "when it's best" to sub. For a sample of sub strategies please see the sample guide below or the strategies from the previous Cup.